AccuWeather meteorologists are predicting torrential rainfall from slow-moving Sally — up to 30 inches — will unleash a significant flooding event over a portion of the southern United States.

AccuWeather Global Weather Center – September 15, 2020 –  Portions of the northern Gulf Coast face “extreme life-threatening” and “historic” flooding through the middle of this week as Hurricane Sally has slowed to a crawl just offshore.

AccuWeather meteorologists are predicting torrential rainfall from slow-moving Sally — up to 30 inches — will unleash a significant flooding event over a portion of the southern United States. 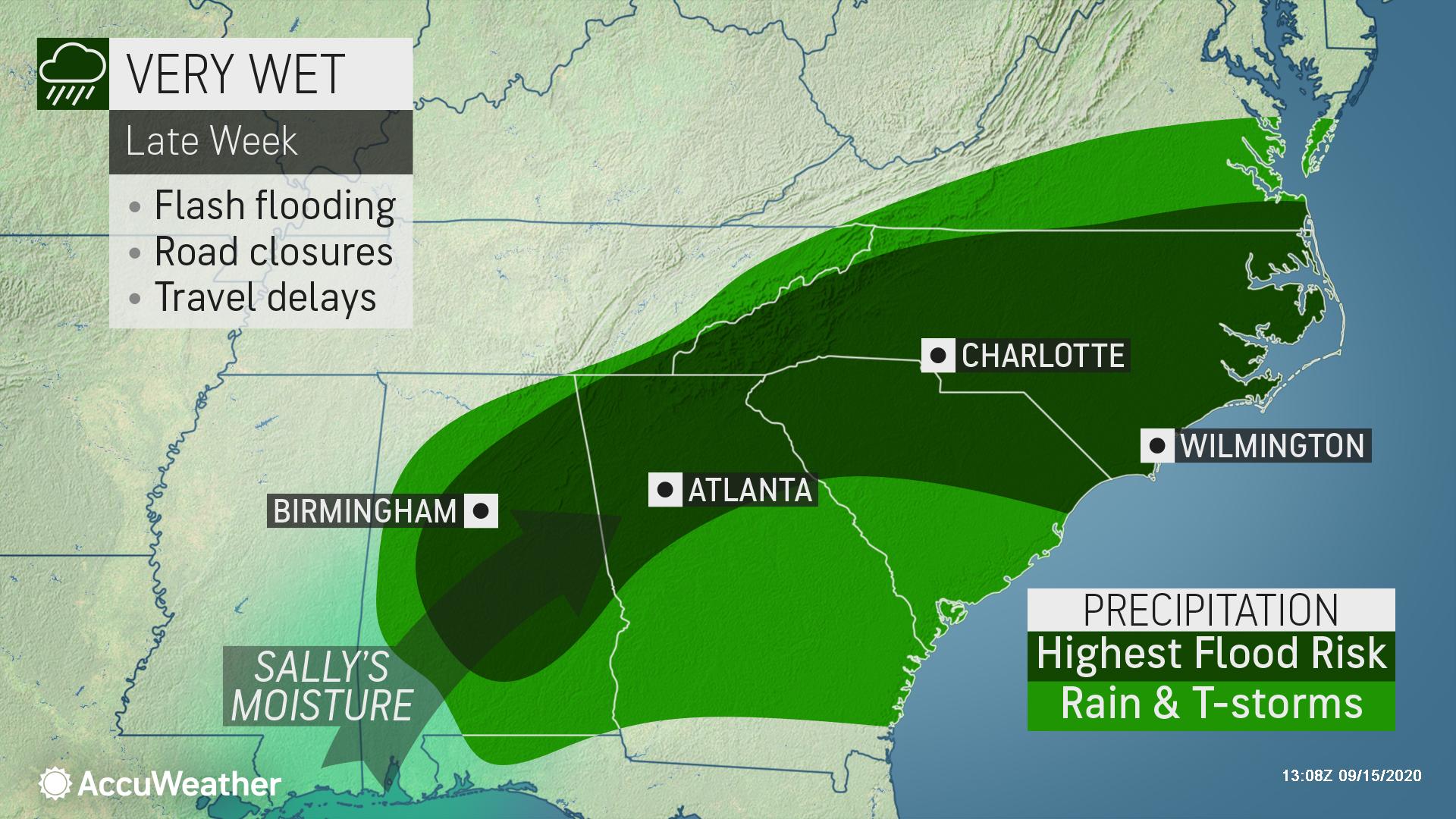 “Sally will be a 2 on the AccuWeather RealImpact™ Scale for Hurricanes, not only from storm surge flooding along the central Gulf Coast, but also the risk from excessive rainfall across the interior Southeast states,” according to AccuWeather Senior Meteorologist Adam Douty.

The AccuWeather RealImpact™ Scale for Hurricanes is a 6-point scale with ratings of less than one and 1 to 5 that was introduced by AccuWeather in 2019 to rate tropical systems based on multiple impacts, rather than just wind, like the Saffir-Simpson Wind Scale does.

A repeat of the magnitude of Harvey’s flooding in 2017 is not anticipated, but Sally’s forward motion will remain slow following a pause along the central Gulf Coast. Sally will unload excessive rainfall on portions of southeastern Mississippi, Alabama, Georgia, the Florida Panhandle and the Carolinas as it takes a slow, curved northeastward path through the end of the week.

Harvey deposited up to 61 inches of rain in southeastern Texas over a several-day period during late August to early September and claimed the lives of more than 100 people.

Wildfire smoke reaches the East Coast — while still smothering the Northwest
For weeks, residents up and down the West Coast have been checking forecasts to find out when the suffocating, hazardous wildfire smoke will shift and allow them to once again open their doors and windows. Smoke from deadly wildfires in the West can be seen on other side of country
The fires burning on the West Coast is producing smoke that was seen in Virginia and New York skies on Monday.

West coast cities face the world’s worst air quality as wildfires rage
Smoke from the fires, which have burned millions of acres across the west, has nearly reached Hawaii and Michigan

Read in The Guardian: https://apple.news/A8JF8-8YXSAyLUvefR5SiOw After Journey from TV’s ‘Hercules’ to Cinema’s ‘God’s Not Dead’ to the Book ‘They’re Your Kids,’ Sorbos Set Sights on National Revival

NEW YORK — Hollywood power couple Kevin and Sandra Lynn “Sam” Sorbo, who married after meeting on the set of Hercules: The Legendary Journeys — one of the highest-rated syndicated TV shows of the 1990s — are joining forces with “The Return: National and Global Day of Prayer and Repentance,” a likely pairing for the couple who are active Christians and routinely speak out for biblical values.

The Sorbos will join several thousands of Christians on an exciting journey to the National Mall in Washington, DC, on September 26 for a landmark gathering known as “The Return” — fueled by hundreds of churches across the world. The gathering will amplify “The Return” call for all pastors, churches and families from every denomination and background to lead the United States in turning from sin back to God.

A biomedical engineering student at Duke University turned model and actress, Sam Sorbo — a leading advocate for homeschooling — went on to write They’re Your Kids, arguing that teaching children about God is critical to their ethical growth.

“We need to be teaching children that there is good and evil, right and wrong and that they should aspire to things outside themselves,” Mrs. Sorbo told The Christian Post. “Godly values and more instruction can do that. God is Truth. He is the Word.”

The Sorbos have long proven a powerful team as Christian faith leaders. Families who missed the 1990s Hercules series may remember Mr. Sorbo from his on-screen role in God’s Not Dead (2014). It is no surprise that the Sorbos are supporting “The Return” in calling America to once again find her moral footing in God’s eternal word, not in the shifting sands of relativistic humanism.

New York Times best-selling author Jonathan Cahn, who serves as co-chair of “The Return” with Pastor Kevin Jessip, says that the timing for America to return to a righteous foundation is right now.

Cahn has recorded a special video about the event, which has over two million views. In addition, online resources are available, including videos and downloads for individuals, pastors and churches. Daily devotionals also encourage personal repentance and consecration.

The Sound of Songs and Shouts of Joy

The Sound of Songs and Shouts of Joy