‘The Return: Next Generation’ Worship Service on Friday, Sept. 25 Will Launch Next Day’s Landmark Gathering of Thousands of Christians NEW YORK — Battered by the winds of a pandemic, social unrest and an especially contentious election season, America is now poised to answer a call to repentance and restoration signaled from the lighthouse of a grassroots church movement known as “The Return: National and Global Day of Prayer and Repentance,” — now set to kick off one day earlier, with a newly added worship and prayer service called “The Return: Next Generation.”

Scheduled for September 25 from 6 to 9 p.m. ET on the National Mall in Washington, DC, the special service known as “The Return: Next Generation” welcomes the general public, young people, families—all can join as a precursor to the main gathering of “The Return” on September 26, which will draw tens of thousands in person and online.

The Return: Next Generation will be honoring our military, law enforcement and Mike Lindell will be launching his new national addiction Lindell Recovery Network, national music artist Danny Gokey and other artists, alongside a moving key note message given by Nicky Cruz.

Attendees should enter the special September 25 gathering at 12th Street and Madison Drive and are encouraged to observe appropriate social distancing, aided by fencing provided by the crew of “The Return: Next Generation.” Food trucks and portable restroom facilities will be available.

In ancient times, the Greeks referred to kairos to mean “opportunity,” a sailing term that literally means “toward the port.” At the precise moment, sailors used it to describe when the tide and winds were favorable to make it safely to port. They would set their sails to take full advantage of it. Pastor Kevin Jessip, along with New York Times bestselling author Jonathan Cahn — co-chairs of “The Return” — believe September 25 and 26 represent America’s kairos moment.

“When God is at work, as He is now, we must wake up to that opportunity, set our sails to His favor, and ride in His boat, using the wind and tide,” Jessip said. “The time has come for each of us. We have been called to seize the moment! We are at the threshold of the greatest move of God in our time.”

Jessip believes the opportunity is time-sensitive and demands courage of the American church, and that the moment could easily be lost by those who hesitate.

“‘Opportunity’ implies ‘the right moment which may only last for a moment,’” Jessip said. “Kairos means a God-given opportunity is being offered to mankind at a specific moment in time. However, the word also implies there is a risk of faith. In other words, as time moves on, the opportunity can be missed.”

That’s why Jessip and Cahn, along with many Christian leaders throughout America, are urging people to attend “The Return: Next Generation” worship service on September 25 in person or online, as well as the main September 26 gathering that will call the American church to prayer and repentance.

“We are living in a Kairos moment today,” Jessip continued. “We believe that working together in unison under the leadership of Jesus Christ, we will be honoring the appeal of the apostle Paul when he said in Romans 15:5-6, ‘May the God who gives endurance and encouragement give you a spirit of unity amongst yourselves as you follow Christ Jesus, so that with one heart and mouth you may glorify the God and Father of our Lord Jesus Christ.’”

Cahn recorded a special video about the event, which already has nearly two million views. In addition, online resources are available, including videos and downloads for individuals, pastors and churches. Daily devotionals also encourage personal repentance and consecration.

Sharon and I have been blessed to meet Jonathan Cahn at the National Religious Broadcasters Convention in Nashville years ago, we had an awesome visit. What a blessing! I also have interviewed him on radio. Pastor Mark Tross lined that up for me, which I am so so ever grateful. I highly recommend reading Jonathan Cahn’s new book! 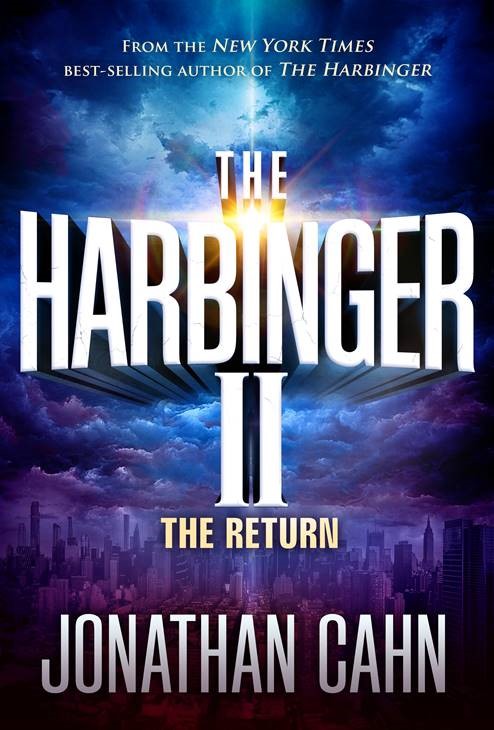 NEW YORK — Jonathan Cahn’s first book, “The Harbinger,” (2012) set the publishing world ablaze with its insights and revelations behind God’s judgment through global-shaking events — and Cahn knew more shaking was to come. Now, eight years later and after several other chart-topping books, the New York Times bestselling author has returned with more stunning revelations in “The Harbinger II: The Return,” which hits shelves today. What was foretold in “The Harbinger” is now coming true. Now “The Harbinger II” reveals where it’s all heading.

The “Harbinger II” will answer the questions: Are the shakings that have come upon America a sign of approaching judgment? Are they the conclusion of the ancient mystery revealed in “The Harbinger”? Where is it all leading? And how much time do we have left?

Ever since Cahn wrote “The Harbinger,” he’s been asked when he would write the sequel. For eight years, he’s held off on writing it. In 2019, he had a strong sense that 2020 would be a year of great shaking upon America and that what was foretold in his first book would come true — that the mystery of national judgment would resume. Thus it was time to finally write the sequel, “The Harbinger II.” Cahn began writing it in January of 2020. Two months later, the shakings foretold in “The Harbinger” came upon the nation.

In “The Harbinger II,” in a section called “The Unrevealed,” Cahn finally reveals the mysteries he held back from revealing when he wrote the first book. In the second section, “The Manifestations,” he reveals the signs, the portents — the other harbingers — that manifested after the first book came out and up to the present moment. And in the third section, “The Coming,” Cahn reveals the ancient mystery that lies behind the present shaking of America, the coronavirus, the economic collapse, the national paralysis, the civil disorder, the riots and the breakdown of America’s infrastructure — and how all these things are part of the ancient biblical template of a nation entering into judgment.

At the same time, “The Harbinger II” will answer the critical question, “Is there hope?” and “What are the keys that every reader must know concerning what lies ahead?”

All these questions — and more — Jonathan Cahn answers today, September 1, in “The Harbinger II.”

Cahn was named, along with Billy Graham and Keith Greene, one of the top 40 spiritual leaders of the past 40 years to have radically impacted the world. Called the prophetic voice of this generation, Cahn is a much-sought-after speaker and has been highlighted in the New York Times as well as in many national and international media. He has spoken on Capitol Hill, at the United Nations and to millions of people around the world. Cahn is known for opening the deep mysteries of Scripture and bringing forth messages of prophetic import. He leads Hope of the World ministry, an international outreach of teaching, evangelism and compassion projects for the world’s most needy. He also leads the Jerusalem Center/Beth Israel, a worship center made up of Jews and Gentiles, people of all backgrounds, just outside New York City in Wayne, New Jersey. His ministry can be contacted at HopeoftheWorld.org and Jonathan Cahn Facebook.

Visit TheHarbingerReturns.com. The Harbinger II: The Return is published by Frontline, an imprint of Charisma House.