God, What Are Your Thoughts? Angel’s Prayer Of The Day…

The Lord bless you and keep you

Did You See That? So Funny! 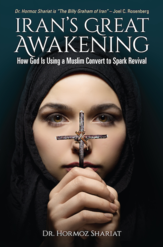 DALLAS, Texas – Joel Rosenberg, world-renowned Middle East expert and New York Times best-selling author, adamantly praised Dr. Hormoz Shariat’s upcoming book IRAN’S GREAT AWAKENING: How God is Using a Muslim Convert to Spark Revival (VOM Books) in his foreword.
“I consider Hormoz Shariat to be the Billy Graham of Iran,” said Rosenberg. “He is far and away the most watched and most influential Iranian evangelist in the world, and his story is well worth reading.”
In IRAN’S GREAT AWAKENING, Shariat shares the details of his personal journey from the bondage of Islam to the freedom of Christ, including the process of establishing Iran Alive Ministries (IAM), an organization that reaches six million daily viewers in Iran through a satellite TV broadcast. Shariat also outlines the biblical prophecies about Iran, noting how they parallel current events, and ultimately concludes that Iran will be a Christian nation soon.
“Today, the mere mention of Iran often conjures up thoughts of war, terror and tragedy,” said Rosenberg. “But Hormoz and I believe a new day is coming. Soon, possibly very soon, the Lord Jesus will move His throne into the heart of Iran… The Islamic Republic will become the Christian Republic. The Islamic Revolution will become a Gospel Revolution.”
IAM reports the many efforts of the Iranian government to contain the spread of Christianity are failing, and God is raising up a Christian revival of historic proportions. For Shariat, this revival is personal.
In 1979, Shariat was a young Muslim on the streets of Tehran shouting “death to America!” while aiding the Islamic revolution. However, when the Islamic Government of Iran executed his 18-year-old brother, he had an encounter with God that changed his life forever. Soon after, Shariat asked God to use his one life to save one million Muslim souls – which birthed his dream to create IAM.
Now, through the use of satellite broadcast, IAM reaches millions of Iranian Muslims worldwide with the gospel and has a significant role in the underground church planting movement in Iran. Since this ministry was founded January 1, 2000, Iran has been named the country with the fastest growing evangelical population in the world today.
Through IRAN’S GREAT AWAKENING Shariat examines this recent Christian revival in Iran by exploring the causes as well as the impact – on the Middle East and the rest of the world. He believes Iran is just the beginning of an unprecedented, massive move of God that is already sweeping over the earth.
“Shariat testifies first-hand that this prophetic, supernatural transformation has already begun in Iran,” said Rosenberg. “But it is far from complete. More is coming. Much more. He wants you to be part of it, and so do I.”
IRAN’S GREAT AWAKENING will inform, encourage and inspire readers into revival. It will be available for public purchase on September 1, 2020 wherever books are sold. Find out more information at iranalive.org/awakening.