FGGAM NEWS just received this news release, we have been promoting the need for people to still tithe to their local Church, please do so if you can. I know many of you are in a tight spot. Here at FGGAM we also have seen a downward trend as we expected. Our son Lars said yesterday, “We are all in this together.” Lars is unemployed at this time and is still waiting on his first unemployment check. Our daughter Gretchen got laid off from her job as a Respiratory Therapist here in Albuquerque, so strange some hospitals have laid off people! Gretchen was able to pick up a part-time job. Let us be in prayer for the over 22 million who have lost their jobs.

More than six out of 10 churches see offerings decline to varying degrees in lockdown; National Association
of Evangelicals to share ‘Bless Your Pastor’ campaign to assist pastors and church staff

A new “State of the Plate” poll involving more than 1,000 churches across all 50 states shows that more than six out of 10 churches have seen a decline in offerings since the coronavirus outbreak began.

The news comes as the National Association of Evangelicals (NAE) — a national organization serving 40 denominations and representing 45,000 churches — prepares to launch its annual Bless Your Pastor campaign, encouraging congregations to “show and share God’s love” for pastors and church staff.

Conducted April 8–20, 2020, the State of the Plate constituency-based survey of leaders from over 1,000 churches revealed 65 percent have seen giving decrease since mid-March as churches stopped holding in-person services.

“For pastors and church staff, there will be difficult days ahead as more church families are laid off or experience reduced incomes,” said Brian Kluth, who originally launched the State of the Plate research following the 2008 financial crisis. Kluth is also the national spokesperson for Bless Your Pastor.

The State of the Plate poll, organized by Kluth with the participation of organizations such as Christianity Today’s Church Law & Tax and NAE Financial Health, revealed:

Giving decreases in churches will likely lead to tighter church staffing budgets. The NAE’s Bless Your Pastor movement (BlessYourPastor.org) equips congregations to show appreciation for their pastors and church staff in creative ways.

Churches are encouraged to share “50 Creative Ways to Bless Your Pastor” — a list of practical ways to show pastors and church staff that they’re appreciated. Churches participating in the campaign will be able to request a grant-funded $250 Amazon gift card for their senior pastor.

Kluth said, “Having been a pastor myself, with three children and a wife who needed major medical treatments, I understand the financial struggle so many pastors and their families face and the tremendous difference it makes when a congregation shows their pastor they are there for them all the way.” 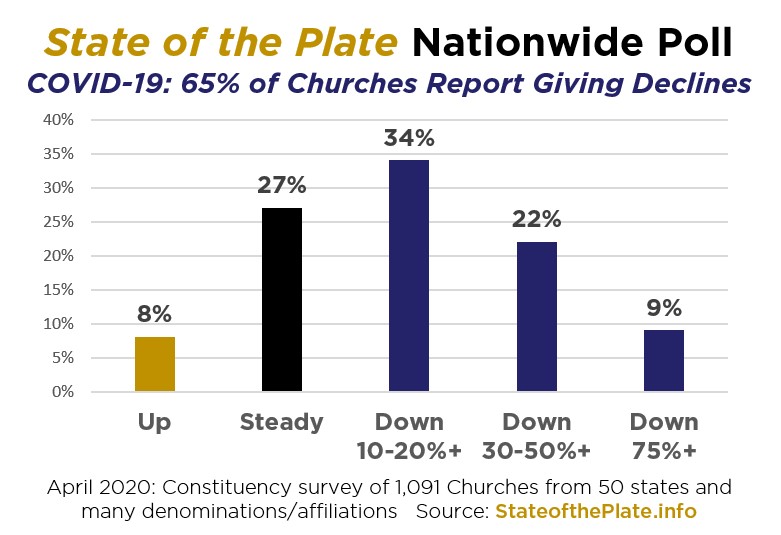 About National Association of Evangelicals:

Founded in 1942, the mission of the National Association of Evangelicals (NAE) is to honor God by connecting and representing evangelical Christians. The NAE includes more than 45,000 churches from 40 denominations and serves a constituency of millions.

MORE FROM THE FGGAM NEWS CENTER:

We are praying for all those that have lost jobs. It is a horrific situation. I wonder how many businesses will end up closing for good? PRAY TEAM JESUS FOR ALL

Virus pushes US unemployment toward highest since Depression

And pray in the Spirit on all occasions with all kinds of prayers and requests. With this in mind, be alert and always keep on praying for all the Lord’s people. Ephesians 6:18

Today’s unemployment numbers show that roughly 26.5 million Americans have lost their jobs since the start of the coronavirus pandemic, completely wiping out the 22.7 million new jobs created since the Great Recession and adding another somber milestone to the economic toll this novel virus has taken on the U.S. Not all areas of the country have suffered equally, however, as you can see from WalletHub’s updated rankings for the States with the Biggest Increases in Unemployment Due to Coronavirus, released today, along with accompanying videos.

To identify which states’ workforces have been hurt most by COVID-19, WalletHub compared the 50 states and the District of Columbia based on increases in unemployment claims. We used this data to rank the most impacted states in both the latest week for which we have data (April 13) and overall since the beginning of the coronavirus crisis (March 16). Below, you can see highlights from the report, along with a WalletHub Q&A.

To see the states most impacted since the beginning of the COVID-19 pandemic, click here.

To view the full report and your state’s rank, please visit:
https://wallethub.com/edu/states-with-the-biggest-increase-in-unemployment-due-to-coronavirus/72730/

How will the unemployment rate change once the COVID-19 pandemic ends?

“Until we have a vaccine for COVID-19, we will not see employment levels similar to the beginning of the year. Once businesses start to open, we will see the unemployment rate stabilize and then slowly start decreasing. The economic stress put on businesses by the coronavirus crisis may prevent them from having the resources to do much hiring at the start,” said Jill Gonzalez, WalletHub analyst. “Some industries’ hiring will bounce back sooner than others; for example, restaurants that are reopening will need to hire serving staff again after laying off or furloughing them during the switch to takeout-only meals.”

How do red states and blue states compare when it comes to increases in unemployment?

The state with the current largest number of COVID-19 cases in the U.S. is New York. How has New York’s unemployment rate been affected?

“New York has seen a 357% increase in initial unemployment claims from the beginning of 2020 to the week of April 13,” said Jill Gonzalez, WalletHub analyst. “This is better than the average increase of 1,544%.”

What can states do in order to minimize the rise in their unemployment rates?

“States should aggressively focus on helping the companies in the most need. The federal response will include sending checks to most citizens, even those whose income has not been affected by the coronavirus. States can use a more targeted approach to divert resources to the companies affected the most, thus having maximum impact for the money spent,” said Jill Gonzalez, WalletHub analyst.

American Minute with Bill Federer: “So Help Me God”: What is the Purpose of an Oath?

Normalizing immorality: Polyamorous “weddings” and the claim that affairs can “strengthen a marriage”

A Cloud Of Witnesses… Angel’s Prayer Of The Day