President elect Donald Trump gave an interview on “60 Minutes” on Sunday that has the lawless mayors of America and their progressive followers worked up. Mr. Trump told correspondent Lesley Stahl that he plans to deport or incarcerate those people in the country illegally and guilty of criminal activity.

“What we are going to do is get the people that are criminal and have criminal records, gang members, drug dealers, where a lot of these people, probably 2 million, it could be even 3 million, we are getting them out of our country or we are going to incarcerate,” Trump said. 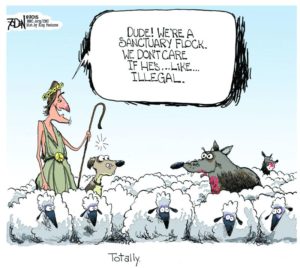 The response from America’s less lawfully inclined mayors has been less than supportive to say the least. Mayors like Chicago’s Rahm Emanuel continue to encourage and shield criminals by declaring their cities “sanctuary” cities even though such a declaration is not lawful, they do not have the power or authority to make such a choice.

Thus began the “sanctuary city” which is a misnomer because an illegal undocumented individual will not receive actual sanctuary from the laws of the United States but rather the city will be a co-conspirator in concealing the person’s activity, the federal government can still arrest and deport someone found to have broken into the country.

[tweetthis]an illegal undocumented individual will not receive actual sanctuary from the laws of the United States.[/tweetthis]

The 31 open “sanctuary cities” in the United States offer a false hope to the often desperate people hoping to remain in this country despite having entered over the fence instead of the gate.

The mayors of these cities have not worked with their federal lawmakers to change the laws they claim to disagree with on moral grounds but instead encourage lawlessness by shielding even illegal immigrants who have committed violent crimes such as rape, theft and murder.

Mayors like New York’s Bill de Blasio, Chicago’s Rahm Emanuel and Seattle’s Ed Murray are using the emotional component of these issues to garner sympathy toward their dangerous actions.

“Seattle has always been a welcoming city,” Mayor Ed Murray said Monday. “The last thing I want is for us to start turning on our neighbors.” You will notice the disingenuous nature of the statement that replaces the criminal argument with the appealing “neighbor” label. After all, who would be in favor of protecting a rapist neighbor?

These mayors prefer to keep the flow of illegal immigration coming to change not only American cities but the United States as a whole.

I do not refer to the ethnic makeup of the United States as that will change regardless of immigration policy but rather to the ideological makeup. The immigration from south of the border along with the Middle East and Africa is made of people accustomed to forms of socialism and communism and oppressive religious ideology, not those seeking freedom and wanting to change their allegiance to American liberty.

This is at the heart of the godless progressive agenda.

American progressive mayors are not looking out for the immigrants of illegal entry status they claim to care about but they are willing oppose law and order to make it appear that they do care in order to fundamentally transform the United States into an enslaved former super power.

It matters little, if at all to these mayors that they endanger all people in their cities by allowing the criminal element to thrive and prosper, because they embrace the godless ideology of the devil who longs not only to enslave but to steal, kill and destroy.

They are at peace when immorality is normalized and the lawless drug dealers and gangs make the people suffer. Just look at Chicago and its Mayor Emanuel who spoke against the deportation of violent criminal migrants in the country without permission, his city breaks records every other week for murders but he refuses to see the correlation between his godless and lawless progressive agenda (that President Obama supports too) and the massive death toll that surpasses any war we are fighting in the Middle East.

The bible makes it clear that those who hold the ideology of these progressive and lawless leaders enjoys getting drunk off of the blood of the innocent. They care little, if at all, for the lives of anyone much less minorities of whatever background or those who must live in fear due to their illegal status being encouraged to put themselves in such an impossible situation.

These progressive leaders are cruel and few will call them on the cruelty they hand out as compassion, but they are not ashamed of their evils deeds and words.

How to live a blessed life

The Progressive Agenda Marches on to Legalize Pot

The Right to Be Free From Sin