I get really excited over the silliest of things. For example, the latest iPhone update included additional emoji’s, of which two were… are you ready! An emoji which rolled it’s eyes and one wearing my glasses. I know!!!! Is that cool or what? I warned you it was silly. But I’m am eye roller, just ask my kids. I need that eye rolling emoji if for nothing else, just being able to send it to my kids so they know I’m rolling my eyes. And the one wearing my glasses, well that’s just cool.

How about an “I’m holier than you emoji.” It would have a dangling cross beneath it’s chin and a smug look. I needed that one last week when someone looked down their nose at me because sometimes my warped sense of humor goes too far. It would have been wasted though because I don’t foresee myself being in a “texting” conversation with that person. But I’d still like to have it for grins and giggles.

What about animated emoji arms of praise. I need that!!!!

A more practical use of an emoji would be the preacher one. I’ve seen the emoji with Catholic collars, but we’re Baptist so I’d prefer my emoji preacher would skip the collar and perhaps be behind the sacred desk. I could use this one as a reminder to my kids that services start at 10. Or any other time I wanted to remind them that they need to attend church. And when they responded with an excuse I could send them the rolling eye emoji. Win win!

One that I’m sure we could all use is a “What were you thinking” emoji… no wait. Just use the eye rolling one it’s universal!

There most assuredly needs to be that Baptist “talk to the hand” not to the face emoji. That way when someone else tried to share their opinion they could just message them this emoticon and the arguments would cease. Imagine how   great that would work for church unity. (not)

What about a “back of the head emoticon?” For those church folk always looking back when someone has a new idea and they say “That’s not the way we’ve done it here.” Oh… now I’ve gone to meddlin’!

While I’m there… we need an “eye rolling, smug face, if only emoji’s had hips so I could put my hands on them” emoji so that when kids cost the church money or made a mess someone could send that to the deacon board. Wow… I may have just crossed the line.

We Christians are an emotional lot are we not?

But the emoticon that we really need is the Holy Kiss. The one that says I’m just a sinner saved by grace, but I sure am glad you’re here. I need  to share that one before I share any of the others, even with the mean people. 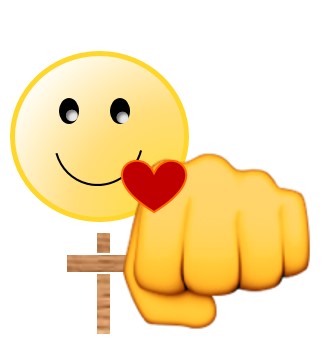 Salute one another with an holy kiss. The churches of Christ salute you.

All the brethren greet you. Greet ye one another with an holy kiss.

Greet one another with an holy kiss.

Greet all the brethren with an holy kiss.