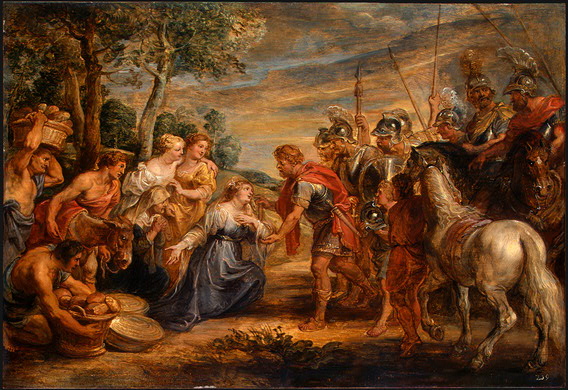 What do you do when the world around you is full of wickedness and you’d like to lash out and do ungodly acts? When you’ve had it up to your eyeballs with bad attitudes and hatred spewed in the name of politics, when the Name of Christ is uttered in contempt and it seems as though it’s in vain that we attempt peace? There was a day that it took a woman to fix the mess that man had created.

In the book of 1 Samuel chapter 25 we find the story of Abigail, wife of Nabal who was a wicked, self-centered man, described as Belial; a demon himself who no doubt made this woman’s life miserable, and yet she stayed. David who had yet to become King was on the run from Saul with a band of rag tag men who had been described as “every one that was in distress, and every one that was in debt, and every one that was discontented”. Not exactly an army of heroes that we read about with David in other stories. But at this point we find David and his men voluntarily performing the unpaid task of body guards over Nabal’s men as they were in the same fields shepherding. David thought it not too much to ask of Nabal for a few victuals  but Nabal’s arrogance railed against David, who he knew to be future King saying “ Who is David? and who is the son of Jesse?”

He was about to find out! The next thing you hear David saying is “Gird ye on every man his sword”. It was the equivalency of the Power Rangers of the day. But then came Abigail.

A few lessons from Abigail that help me this morning in the face of this adverse world we live in.

She waited in Adversity

Living with a man such as Nabal was not an easy task, and though it would have been the culture of the day for her stay it wouldn’t have made it fun. Yet we find her there with an obvious respect of her household and a desire to care for them. Our main role in this life (aside from the first serving God) is to take care of our family and make it as pleasant as possible. Abigail had garnered respect and honor, her husband’s staff obviously felt that she was competent to get something done because when they’d heard what Nabal did to David and knew that there would be certain repercussions, they came to Abigail for help.

It’s often not easy serving when the world around you disregards God and His people. But it’s important to stand strong in the faith so that in the hour of need, those around us know in whom they can depend.

She waited on an opportunity

As soon as the servants came to Abigail with the news of her idiot husband’s behavior she went into survival mode. She knew that she would need to fix what her husband had broken. She didn’t go to David with excuses, she went to David with humility. We’re not going to gain God’s mercy and grace on this Nation by making excuses, we’re going to have to go to Him in humility for our idiot leadership who spout off to God with their behavior “Who is God?” I have wonder how many times the sword could have been drawn on us if it had not been for God’s people taking that opportunity to intercede on America’s behalf.

Abigail waited… both in time and in service. We should do no less.