A report from Natural News: The rapid explosion of mystery virus EV-D68 is sending hundreds of children to hospitals across Missouri, Colorado, Kansas, Utah and eight other states. “In Kansas City, about 475 children were recently treated at Children’s Mercy Hospital, and at least 60 of them received intensive hospitalization,” reports CNN. (1)

CNN goes on to report:

“It’s worse in terms of scope of critically ill children who require intensive care. I would call it unprecedented. I’ve practiced for 30 years in pediatrics, and I’ve never seen anything quite like this,” said Dr. Mary Anne Jackson, the hospital’s division director for infectious diseases.

What CNN and other media outlets are not reporting, however, is that this outbreak is occurring among vaccinated children.

Did other vaccines make children more susceptible to EV-D68 infections?

Children who have been vaccinated with MMR vaccines, influenza vaccines, polio vaccines and many others are the same children who are now being struck by EV-D68. How do we know this? Because we know how the rabid pro-vaccine media consistently reports on viral outbreaks:

Vaccine media propaganda rule #1) If an outbreak ever occurs among unvaccinated children, then the published stories will strongly condemn parents for failing to vaccinated their children while promoting vaccines as the one and only solution.

Vaccine media propaganda rule #2) If there’s an inconvenient fact about vaccines that the media doesn’t want the public to know, it will withhold that fact from all its stories. This was made abundantly clear in the recent media-wide blackout of the CDC whistleblower story, where top CDC scientist Dr. William Thompson openly admitted to committing scientific fraud at the CDC in order to hide the link between MMR vaccines and autism. Click here to read the once-secret letter Dr. Thompson sent to CDC director Julie Gerberding, admitting to a cover-up.

Media doctors hopelessly clueless about what to suggest to parents

Because there is no vaccine for EV-D68, the media can’t push vaccines as the solution for these infections. And so the media seems totally lost and clueless about what to report. There’s no mention of protecting children’s immune systems with vitamin D, and no mainstream media outlet even dares mention the words “immune support” for fear that people might realize a strong immune system is far better than a vaccine at preventing infectious disease.

The best advice CNN can come up with reads as follows:

To reduce the risk of infection, individuals should wash hands often with soap and water for 20 seconds, especially after changing diapers; avoid touching eyes, nose and mouth with unwashed hands; avoid kissing, hugging and sharing cups or eating utensils with people who are sick; disinfect frequently touched surfaces such as toys and doorknobs; and stay home when feeling sick…

Again, note the complete lack of any discussion about zinc, vitamin D, immune-boosting herbs, avoidance of toxic immunosuppressive chemicals and food additives, and so on. This is the default position of the mainstream media: “Wash your hands.” It is literally watered-down advice by a propaganda institution that functions as the vaccine industry’s ministry of truth.

Even when children’s lives are at stake, the media is so opposed to nutritional defenses that it consistently refuses to mention a low-cost, high-safety, readily-available nutrient like vitamin D that could save countless lives during a pandemic outbreak… even if used in conjunction with vaccines! (See my Blueprint for Safer Vaccines document here.)

The over-reliance on vaccines in public health will ultimately kill millions of children in a real outbreak for the simple reason that vaccines are blindly relied upon at the exclusion of all else. So when a pandemic comes along that has no vaccine, doctors and health authorities are literally clueless about what to recommend other than “wash your hands.”

Any honest health care system that really cared about public health would have a multi-layered pandemic defense strategy which included immune boosting activities, nutritional defenses, behavioral modification, personal hygiene reinforcement and finally medical intervention as one layer among many.

The problem with vaccines — even if they work (which they mostly don’t) — is that they can’t keep up with mutating viruses in the wild. This current outbreak of EV-D68 has caught the medical establishment completely off guard. They have no vaccines to recommend, and so doctors and health authorities sit around taking their own rectal pulses (i.e. they have their thumbs up their hind ends) while children fill the emergency rooms at hospitals. A simple vitamin D education campaign could slash these infections by huge margins. Vitamin D “activates” the immune system at so many levels that if vitamin D were a pharmaceutical, it would be called a “miracle drug” and whoever created it would be awarded the Nobel Prize for Medicine.

But it’s not a drug; it’s a simple, low-cost vitamin. So doctors aren’t taught anything about it and parents are never told to use it. Especially not when there are vaccines to push and pregnant women to inject with mercury.

Some astounding quotes about the severity of this outbreak

“An unprecedented lung virus that has infected over 1000 children across 10 states from the Midwest to the east coast is likely to spread to the rest of the country, doctors have warned.” (2)

The unusually high number of hospitalizations reported could be “just the tip of the iceberg in terms of severe cases,” said Mark Pallansch, a virologist and director of the Centers for Disease Control and Prevention’s Division of Viral Diseases. – CNN (1)

“A respiratory illness that has already sickened more than a thousand children in 10 states is likely to become a nationwide problem, doctors say.” – ABC News (4)

“Just weeks after the Obama administration let more than 37,000 illegal-alien children into the U.S. without health screening, more than 1,000 kids across 10 states have been stricken with a respiratory virus – prompting widespread concerns about a major outbreak sweeping across the nation.” – WND.com (3)

“It’s worse in terms of scope of critically ill children who require intensive care. I would call it unprecedented. I’ve practiced for 30 years in pediatrics, and I’ve never seen anything quite like this,” said Dr. Mary Anne Jackson, the hospital’s division director for infectious diseases. – CNN (1)

One more noteworthy twist on this entire story has been fielded by radio host Michael Savage, a very high-IQ individual trained as an epidemiologist.

Yesterday he said on his radio show: (3)

For 20 years, I’ve been trying to warn America about the unscreened immigrants being brought in. Now, of course, it’s coming home to roost and the American people are being lied to by the Centers for Disease Transmission. They used to be the CDC; they’re now the CDT.

Instead of stopping disease spread, they’re encouraging it by not speaking out against bringing in infected children and putting them in our public schools, right? It’s astounding to me what they can get away with because of the ignorance of the public. Common sense is gone. …What do you expect to happen if you put a kid with a certain virus into a school where they’ve never been exposed to that virus? It’s called an epidemic breakout.

…This population in America, which once enjoyed the greatest health on earth, is now being devolved into a second-world nation in terms of health because Obama is so corrupt, was so ignorant, was so evil that he’s taken what was once the greatest nation on earth and devolving us into a second nation status.

Michael Savage previously warned that Obama’s open borders policy is extremely dangerous from a public health point of view, allowing immigrants with infectious diseases to walk right into the USA and spread those diseases to others.

Interestingly, ABC News’ Chief Health and Medical Editor Dr. Richard Besser accidentally supported Savage’s argument when he said, “Viruses don’t tend to respect borders. It is only 10 states now, but it’s going to be across the country. So if your state doesn’t have it now, watch for it, it’s coming.” (4)

Although his statement was made in the context of the virus spreading from state to state, a virus doesn’t know the difference between a state border and a national border. The claim that “viruses don’t tend to respect borders” is universally true, regardless of the category of the border.

Savage’s argument is further supported by this graphic from WND, showing states which have received illegal immigrants correlated with states which have urgently contacted the CDC to ask for help concerning this sudden outbreak: 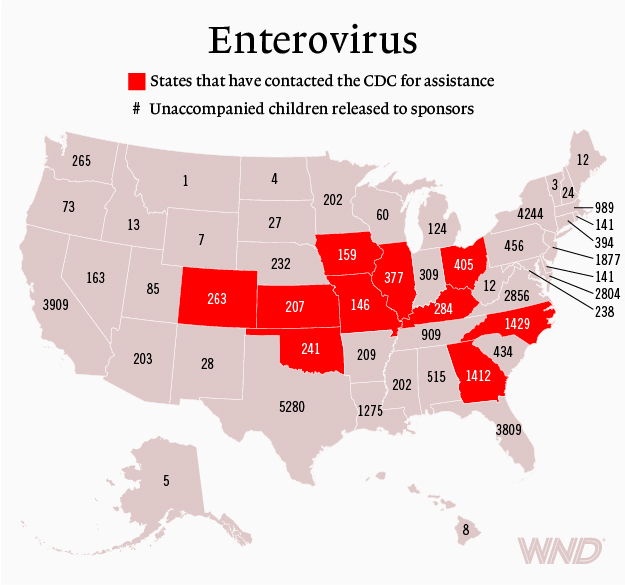 For once, the mainstream media can’t blame “unvaccinated” children because there is no vaccine for this virus. That’s why the medical advice currently circulating around the media for dealing with this outbreak is so remarkably worthless.

Consider the pathetic reality of our present-day government and its failed medical system:

Shocking reality #1) Our current federal government refuses to secure the U.S. border and openly invites immigrants to walk right in, regardless of what they might be carrying from a public health point of view.

Shocking reality #3) Medical authorities outright refuse to recommend any nutritional therapies that boost immune defenses against pandemic diseases. Vitamin D is completely blackballed from any official advice, even when there are no other options available. And don’t even dare mention Chinese Medicine herbs or various herbal remedies.

Shocking reality #4) Many advocates of vaccines are also strong advocates of population reduction. They actually applaud shrinking the number of living humans on the planet. So pandemics literally help them accomplish their goals. “That’s the answer!” remarked Dr. Charles Arntzen in a comment caught on video. “Go out and use genetic engineering to create a better virus. (laughter) Twenty-five percent of the population is supposed to go in Contagion.” (5)

Even more, Bill Gates famously stated during a public presentation that vaccines could help lower the human population by 10 to 15 percent. His exact words:

“The world today has 6.8 billion people… that’s headed up to about 9 billion. Now if we do a really great job on new vaccines, health care, reproductive health services, we could lower that by perhaps 10 or 15 percent.”

Don’t believe that he said this? The video has been pulled from Youtube numerous times, but we’ve preserved it at TV.naturalnews.com. Click this link to watch it for yourself. The video leaves no question whatsoever about Gates’ advocacy of vaccines to reduce human population.

Maybe now with Ebola, EV-D68, chikungunya virus and other exploding pandemics that have suddenly taken hold across our world, people like Bill Gates will finally get their wish. A massive population wipeout may be just around the corner, and if you tune in to CNN, they will probably feature fifty high-level scientists telling you all the different ways you can wash your hands while waiting for the CDC to rescue you with an experimental vaccine that carries a 40% fatality rate like the ZMapp Ebola drug.

Why is Satan called the father of lies?