Our local ABQ referendum is gaining traction throughout the nation in big ways. Please continue to pray for the upcoming election on November 19th and also for this Senate bill introduction below.

Washington, DC – Stating that he is acting more on conscience than politics, Sen. Lindsey Graham will introduce today a version of the Pain Capable Unborn Child Protection Act in the U.S. Senate that would ban abortions after the fifth month of pregnancy when pre-born babies are known to feel pain. Sen. Marco Rubio has signed on as a co-sponsor.

A similar, but slightly different bill was passed by the House earlier this year after a committee hearing that heard testimony scientific studies confirming pain is experienced by the baby in the womb even before the 20-week limit. Also shown at the hearing were photos obtained by Operation Rescue depicting late-term aborted babies taken by shocked employees at Douglas Karpen’s abortion clinic in Houston, Texas, in July, 2012.

The introduction of the Senate version continues the wave of legislation aimed at halting abortions halfway through pregnancy and later. Such late-term abortion bans enjoy huge popular support as Americans more are embracing the pro-life position.

A Quinnipiac Poll released in August 2013, shows 55% of Americans support banning abortions after 20 weeks. Another poll conducted by the Polling Company released earlier this year showed 65% approval for the 20-week ban. Even in more liberal enclaves, such as Albuquerque, New Mexico, where a municipal edition of the Pain Capable Unborn Child Protection law goes to a vote on November 19, and Albuquerque Journal Poll shows that 54% of likely voters in that city support the measure. 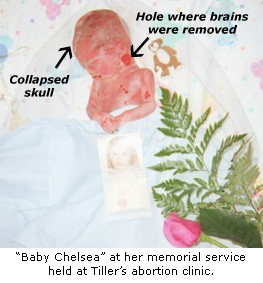 The late-term abortion process employed by most abortionists today is a modified version of the now-illegal Partial Birth Abortion method that is generally reviled as barbaric and inhumane. Themodified version was developed by George Tiller at his infamous late-term abortion clinic in Wichita, Kansas. It involves injecting the living baby through the wall of the woman’s abdomen with an outdated heart drug called Digoxin, which is mean to stop the baby’s heart prior to inducing labor.

But Digoxin does not always work. Literature on the subject of the efficacy of Digoxin injections to accomplish “fetal demise” indicate that the injections fail about 13% of the time even under the best circumstances, and if the drug is injected into the amniotic sac instead of the fetus, the failure rate on the first try can be asastronomically high as 70 percent. Dr. Karen Feisullin, a practicing ObGyn at a Philadelphia hospital testified during the trial of Kermit Gosnell earlier this year that Digoxin injections can take up to 24 hours for Digoxin to actually kill a pre-born baby, depending where the injection is made.

This means sometimes the babies are born alive. Gosnell was convicted on 3 counts of First Degree Murder for intentionally killing babies born alive during abortions that the Pain Capable Unborn Child Protection laws would ban. While Gosnell may have been the only one convicted of murdering live babies after failed abortion procedures, he certainly is not the only one to do so. The testimony and photos produced by employees ofDouglas Karpen in Texas indicate that the throats of babies are cut or twisted when babies are born alive at his clinic. Operation Rescue has received reports that indicate the practice is relatively common.

The late-term abortion process, which takes 3-4 days, concludes with the delivery of the dead baby. In some cases, women are told to squat over a toilet and push their babies into the toilet bowl. Sometimes the babies are dismembered during removal. Other times, scissors are inserted into the back of the neck so suction can be used to vacuum out the content and collapse the skull for quicker delivery.

Late-term abortion specialist Shelley Sella, who travels from California to do abortions at the nation’s largest late-term abortion clinic, Southwestern Women’s Options in Albuquerque, explains the procedure this way:

One four-day outpatient treatment involves euthanizing the fetus with a shot into the heart, and then inducing a full labor and delivery. Unless people understand what’s going on for the woman, it’s impossible to support it. How could you? It sounds barbaric.

“As a civilized society, we must employ other means of dealing with the challenges faced by women in the advanced stages of pregnancy than inflicting the brutality of late-term abortions on them and their well-developed babies,” said Troy Newman, President of Operation Rescue, whose staff have done extensive research on late-term abortions, and are responsible for license revocation of Tiller’s associate, Ann Kristin Neuhaus. “We support Pain Capable Unborn Child Protection laws for moral, ethical, and humanitarian reasons and applaud Sen. Graham for introducing a law that will protect pre-born babies halfway through pregnancy as a crucial step toward the eventual and complete abolition of abortion.”

Because of Christ we stand,
Bud and Tara

“Seek the well being of the city to which I have sent you. Pray for it to the Lord. For in seeking its well being you shall find your own.“ Jeremiah 29:7

PRAY FOR AMERICA! Teens and young adults have faced some of the heaviest struggles as they come of age during a time of extreme...

What is the secret to standing strong when troubles come?