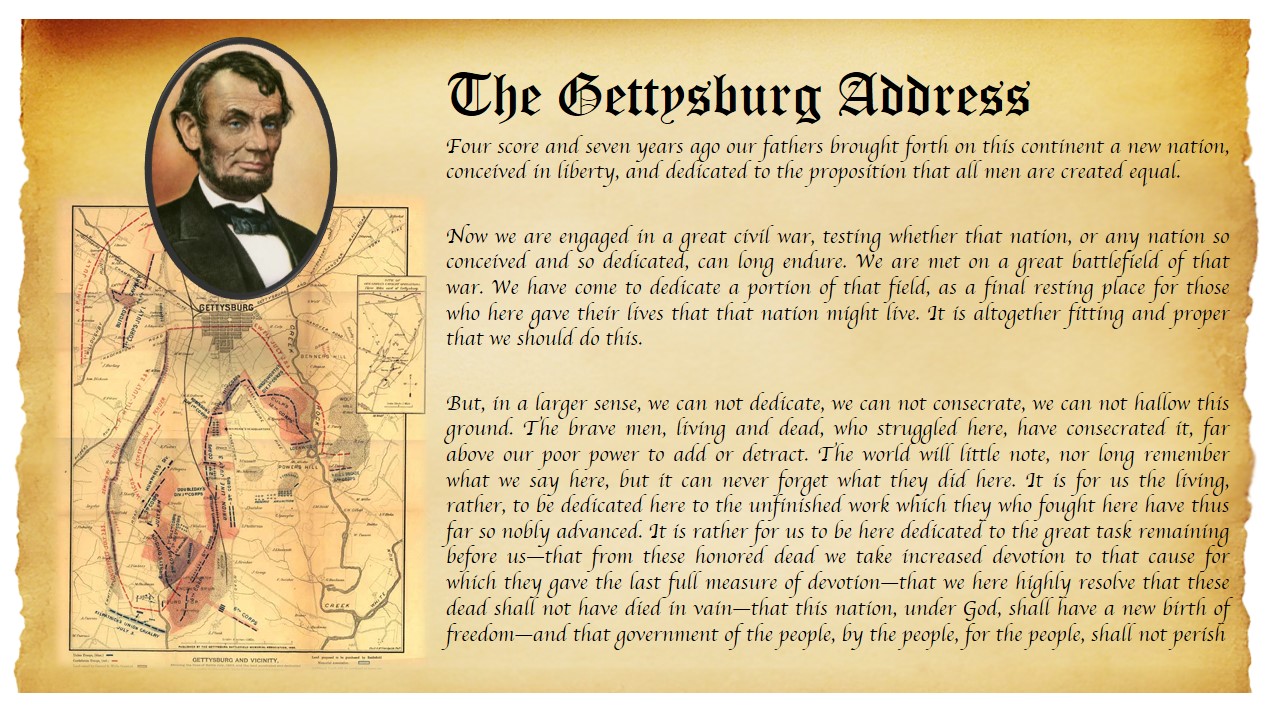 November 19th went by with little fanfare in the United States. It could have possibly been on the news, the likelihood of me seeing it there was slim to none. But as I read the Gettysburg Address this morning, my heart longed to hear a modern day political official speak with such eloquence and spiritual depth. It was a very short speech in comparison to most but I feel safe to say it had a far greater positive impact on our Country than anything coming out of the Whitehouse in current times. Note that I said positive impact.

He began the address with the words four score and seven years ago which much resembles Psalm 90:10 that reads “The days of our years are threescore years and ten; and if by reason of strength they be fourscore years, yet is their strength labour and sorrow; for it is soon cut off, and we fly away.” And he ends his address with a call to action of those gathered there. He acknowledges the honored dead  who were sacrificed so that our nation was given another chance, a new birth of freedom; a nation under God (Sovereignly ruled), and a nation  of the people, by the people and for the people that shall not perish. Showing his compassion and concern for those he served.

Look how far we’ve come. My heart is saddened for our nation, but not without hope, because I still serve the God of Abraham and Isaac, and Abraham Lincoln.

I’m not going to get into politics, it speaks for itself. Volumes. But I would like to offer you a suggestion of prayer for our nation as we go into the week of Thanksgiving.

Read the Gettysburg Address (it will only take a minute) and then pray the A.C.T.S. method of prayer.

Adoration – Acknowledge how good God is, and that it is His sovereignty that has allowed America to be the Great Nation it is.

Confession – Confess that as an individual and as a nation we’ve not done all we could to protect what we’ve been given.

Thankful – Thank God for the field of faith has gone before us to allow the freedom we still enjoy and for those who unselfishly continue to defend our honor, when we’re not always so honorable.

Pray for each other and the leadership of America. An Abraham Lincoln quote from a speech in Chicago on July 10, 1858 said

Let us then turn this government back into the channel in which the framers of the Constitution originally placed it.

And I stand corrected on tributes to the Gettysburg Address. Check out the Ohio State Video! If you love band music like I do, get you a hankee and enjoy!!! It’s 14 minutes long but worth ever second!

PRAY TEAM JESUS! It Looks Like Putin is Getting Ready to Invade Ukraine!