The protests continue to grow larger and angrier

More than a million people are reported to have taken part in protests in about 100 cities across Brazil, the latest in a wave of demonstrations.

Violence erupted in many places and an 18-year-old man died when a car drove through a barricade in Sao Paulo state.

Protests began more than a week ago over high transport fares but are also highlighting corruption and the cost of next year’s football World Cup.

President Dilma Rousseff called off a trip to Japan to deal with the crisis.

She has called an emergency meeting of her cabinet for Friday to discuss the unrest.

Brazilian media said there were protests in more than 100 cities.

TV images showed gangs looting shops in the city centre – although many Rio shopkeepers and banks had put up wooden hoardings to protect their premises. 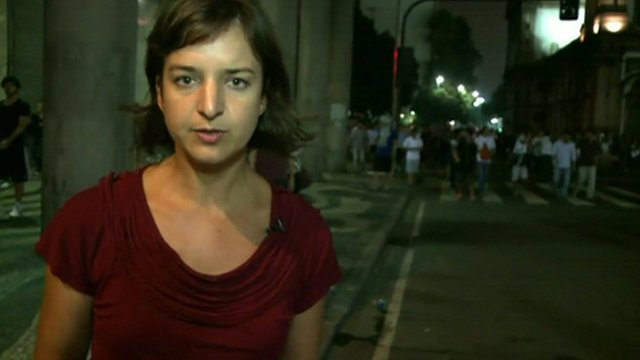 Julia Carneiro “It is not yet known how this will end”

In the capital, Brasilia, demonstrators started a small fire at the entrance to the foreign ministry and were driven back by police using rubber bullets and tear gas.

Other government buildings in the city were attacked and riot police used tear gas and rubber bullets to scatter the crowds. About 26 people were reported injured.

There were also clashes outside a football stadium in Salvador ahead of a Confederations Cup match between Nigeria and Uruguay.

More clashes were reported in Porto Alegre in the south, Campinas north of Sao Paulo and in the north-eastern city of Salvador.

The 18-year-old man killed in the city of Ribeirao Preto was the first person reported to have died in the protests. The motorist who drove through the barricade is said to have fled the scene.

Members of the city’s Free Access Movement (Movimento Passe Livre) – which has been campaigning for better public transport – earlier pledged to take to the streets “to celebrate” the reversal of a public-transport fare increase.

The protests, originally triggered by the increase on 2 June, have since grown into a much wider movement.

Protesters are angry at corruption and poor public services as well as the huge cost of next year’s football World Cup, saying the government should also invest in education and healthcare.

The controversy over bus and metro fares was only the issue that got the marchers on to the streets – it all seems much bigger than that now.

The objectives of this diverse protest movement are very broad, such as demanding better education and health services. A sluggish economy and inflation that is affecting the lives of ordinary Brazilians every day can be added to the mix.

Politicians with high salaries giving jobs and flights to relatives are widely scorned. Inequality and the huge cost of hosting the World Cup and the Olympics are key issues raised by demonstrators alongside corruption, crime and police brutality.

Previous Confederations Cup matches have drawn protests, with demonstrators expressing their anger at steep ticket prices and the money spent on the Confederations Cup, the 2014 World Cup and the 2016 Rio Olympics.

Sao Paulo Mayor Fernando Haddad said Wednesday’s reversal of the fare rise was a “big sacrifice”, which meant other investments would have to be cut.

Sao Paulo and Rio are the latest two cities to reverse such increases after similar moves by the authorities in Cuiaba, Recife and Joao Pessoa.

The fare rollback, while welcomed by many, has so far failed to quell the protests. 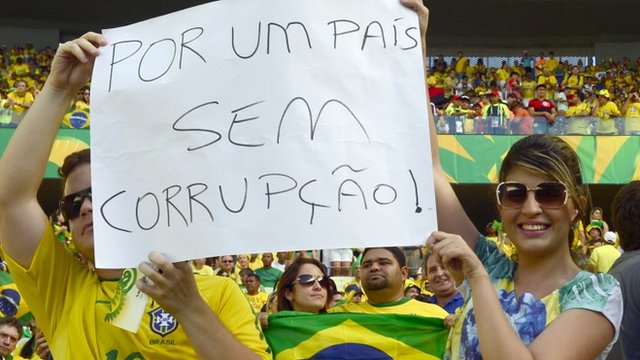 Brazil’s UK ambassador says despite the protests, Brazilians have a positive view of the future

“This means that our politicians have begun to hear our voices. This is something that has never happened before – in a non-election year, at least,” Daniel Acosta from Sao Paulo told the BBC.

“It’s a start. What happens now, nobody knows yet, but it gives us hope,” he added.

But 18-year-old student Camila Sena said the protests had become much wider and the concession on fare prices would not change much.

“It’s not really about the price [of transport] any more,” she said while taking part in a protest in the city of Niteroi, near Rio de Janeiro, on Wednesday.

“People are so disgusted with the system, so fed up that now we’re demanding change.”

The current unrest is the biggest since 1992, when people took to the streets to demand the impeachment of then-President Fernando Collor de Mello.

Is It Time To Pray? Angel’s Prayer Of The Day…