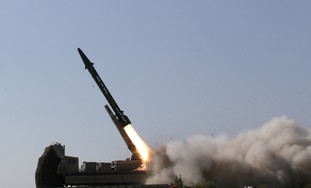 Israel has been working toward a cooperative agreement in compliance with Turkey and three Arab states to implement an allied system of detection technologies to defend against Iranian ballistic projectiles, British newspaper The Sunday Times reported.

The initiative, termed “4+1”, reportedly proposes joint efforts to be taken by Israel along with Turkey, Saudi Arabia, the United Arab Emirates and Jordan to share access to radar and anti-missile technologies, according to the Times.

Under the initiative, Israeli technicians would gain access to data from radar technologies in Saudi Arabia and the Emirates in return for allowing experts from its partners to tap into Jerusalem’s anti-missile and advanced radar defense systems, the report said.

The plan, brokered by the United States, aims to create a “moderate crescent” in the region in contrast to the “fundamentalist crescent” consisting of Iran, Iraq, Syria and Hezbollah, the report said.

Israel views “4+1” as an ambitious plan presented by Washington as “the Americans are working on a regional alliance to deter and contain Tehran,” the Times reported an Israeli official as saying